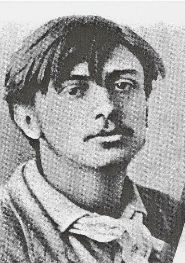 Find out about George Daniel de Monfreid’s life in this official biography, featuring exclusive reproductions of paintings and excerpts from the artist’s own handwritten journals.

George de Monfreid was born on 14 March 1856, assumingly in New York, the only son of operatta singer Marguerite Barrière and from a (fictitious) navy officer named Charles de Monfreid, based on a birth certificate from the American Consultate in Paris drafted 21 years later. The true identity of Monfreid’s father remains a mystery to this day.

At age 20, Monfreid moved to 158, rue du Faubourg Saint-Denis in Paris and enrolled as an art student at the Académie Julian (Paris), an innovative art academy attended by several Nabis and post-impressionist painters. In 1878, he transferred to the Atelier Colarossi (Paris).

His first paintings, classic in style, include Middle-Aged Man (1876) and Evening in the gorges at Apremont, Fontainebleau Forest. Fontainebleau forest was a favorite impressionist hangout and Monfreid’s painting was submitted to the Salon des Artistes Français in 1877.

In the summer of 1876, Monfreid suffered from health issues and spent several weeks by the Mediterranean in a coastal village called La Franqui. There, he met a striking young widow and fell in love. In 1877, he married Marie-Émilie, also known as Amélie, Bertrand, in Paris. Their son, Henry de Monfreid, was born on 14 November 1879.

When set up by the Mediterranean, George Daniel de Monfreid took up a serious interest in sailing and became a travel reporter for the newly-created maritime newspaper “Le Yacht.” As a reporter, he recounted lively sailing adventures in Spain, in France and in Algeria aboard the Follet and L’Amélie. He often made etchings to illustrate his articles and around that time, met Aristide Maillol.

The Volpini Exhibition was an exhibition of paintings arranged by Paul Gauguin held at the Cafe des Arts on the Champs de Mars in Paris, facing the entrance to the Exposition Universelle of 1889. George Daniel de Monfreid exhibited under the name Daniel, along with Paul Gauguin, Charles Laval, Emile Schuffenecker, Louis Anquetin, Emile Bernard, Louis Roy, Ludovic Nemo and Leon Fauche.

His friendship with  Paul Gauguin later became the friendship of a lifetime and George Daniel de Monfreid became Gauguin’s only link to Europe during his Tahitian and Oceania years. Gauguin left for Tahiti in 1890.

Breaking from classicism and impressionism, George Daniel de Monfreid developed a style close to Synthetism (Paysage de Lozère, Vareilles – 1891, La Madeleine – 1891), verging on Symbolism, as evidenced by stained-glass windows he produced at that period. His model for La Madeleine was Annette Belfis, who also modelled for Gauguin and who became Monfreid’s lover around that time.

When Gauguin returned to Paris, George Daniel de Monfreid was painting in Lozere but Monfreid lent his Parisian home to Gauguin, who prepared an exhibition for Durand-Ruel. When both friends met again in the fall of 1893, Monfreid’s painting style was influenced by Gauguin’s Tahitian paintings and he painted the Nabis-inspired  La tasse de thé – 1893 and Portrait de Gustave Le Rouge – 1896.

In 1896, Monfreid purchased a bicycle and became a passionate cyclist in the Pyrenees. On July 9, 1896, he started the first of many bicycling trips, riding from his Roussillon home at the foot of the Canigou to Llansa in Spain and covering 130km (80 miles) on mountain roads in only two days. To escape from the harsh reality of his old embittered mother, he frequently rode his bicycle to the Mediterranean in a day, secretly meeting up with other artists. An amazing athlete, he kept on biking all his life in all types of weather.

Taking care of his ailing mother in Roussillon, George Daniel de Monfreid surrounded himself with artist friends such as Louis Valtat, Aristide Maillol and Eugene Terrus. Destabilized by a covert relationship with Annette and low financial resources, he experienced a mystical crisis and started working on a monumental project, a sculpted terracota representation of the Crucifixion. This sculpture was left unfinished when he died and was only completed by Maillol, based on Monfreid’s notes, in 1938. The sculpture is visible in the church of Vernet-les-Bains in France.

On May 1, 1899, George Daniel de Monfreid welcomed the birth of his daughter Agnès with model Annette Belfis.

Celebrating the natural beauty of the Pyrenees in paintings and bicycle rides, he spent a lot of time outdoors painting luminous landscapes such as Le Village de Prats Balaguer – 1899.

After an exhbition in Beziers, George Daniel de Monfreid met a man who changed his life, Gustave Fayet. Fayet was a wealthy art collector with a discerning eye who bought Monfreid’s first paintings and through Monfreid, started a sizable collection of Gauguin’s paintings. Fayet often welcomed Monfreid  in his home and this resulted in Monfreid painting the portrait of Fayet and his wife (Portrait de Gustave Fayet – 1905).

To take care of his mother, George Daniel de Monfreid left Paris and moved to his Roussillon home, Saint-Clément, becoming the heart and soul of a regional artistic circle with French Catalan poets, painters and musicians (Portrait de Louis Bausil – 1905). Exhibitions at Perpignan and Barcelona. This has been mentioned as the birth of a Roussillon art movement.

In August 1903, George Daniel de Monfreid learned the death of his dear friend Gauguin in the Marquesas and was appointed executor for his will.

As will executor, he researched the circumstances of his friend’s death, gathered Gauguin’s assets for his family, organized a Gauguin exhibition with Fayet at the Salon d’Automne 1906 placed an order, still with Fayet and with Count Kessler, for the first biography of Paul Gauguin by Jean de Rotomchamp.

After his mother’s death, George Daniel de Monfreid moved toward an intimist style of painting (Le thé dans l’atelier – 1905). In 1905, he hosted Henri Matisse and showed him wood sculptures by Gauguin. Two years later, Monfreid produced a painting of the harbor of Collioure in a style close to Fauvism.

In his quest to honor his dead friend Gauguin, George Daniel de Monfreid met Victor Segalen, a French naval doctor who had purchased many of Gauguin’s works in Tahiti at an auction after his death. This was the beginning of another major friendship in Monfreid’s life (Portrait de Victor Segalen – 1909).

Segalen was also a poet and asked Monfreid to illustrate several of his books with woodblock prints (cover art draft for Les Immémoriaux).

As will executor for Gauguin, Monfreid wanted to have Noa Noa published, a semi-autobiographical illustrated text recounting the first years of Gauguin in Tahiti.

Facing hostility from Gauguin’s family who wanted to recover the manuscript to sell it off, Monfreid also had to deal with Charles Morice, a poet who had gotten hold of the original manuscript and added naively colonial descriptions and uselessly wordy explanations to Gauguin’s original text.

Before the 1914-1918 war, Henry and Armgard got married at Saint-Clément in the presence of Armgard’s father, the governor of Alsace in Strasbourg.

Secluded in the Pyrenees during the war, George Daniel de Monfreid avidly corresponded with Henry who was at odds with the French colonial authorities in Ethiopia and was jailed for weapons contraband.

In 1918, only 18 years old, Agnès de Monfreid married Louis Huc the day before the armistice.

In 1917, George Daniel de Monfreid tried his hand at pottery and in the workshop of Gustave Violet in Prades, realized several decors in ceramic. He persevered in the art of ceramic with the Bardou and exhibited several decorated plates at the Salon d’Automne in 1917.

Still a traveler at heart at age 67, George Daniel de Monfreid traveled by boat to Ethiopia to spend a few months with Henry and his family in their African home. In August 1923, he visited Djibouti, Obock and Harrar in Abyssinia, enjoying his son’s exotic way of life as a local smuggler and painting a few beautiful paintings such as his grand-daughter’s portrait, Portrait de la petite coloniale (1923).

Having honed his skills at woodblock printing during WW1, George Daniel committed professionally to woodblock printing from 1924 to create cover art and illustrations for Gauguin’s Noa Noa as well as to illustrate books and texts by (the now-deceased) Victor Segalen, at his widow’s request.

During the night of 25 to 26 November 1929, George Daniel de Monfreid died at Saint-Clément (Gravure: In principio erat verbum – 1927). He was 73 years old, still in great physical shape, and circumstances around his death indicate that he may have committed suicide.